On August 15, 1910, Uruguay and Argentina contested the sixth edition of the Copa Lipton, the most important international fixture in Rioplatense football at the time. Uruguay were in one of their lowest moments. Just two months earlier in Buenos Aires, they suffered a humiliating 4-1 defeat to Argentina in the final of the Copa … END_OF_DOCUMENT_TOKEN_TO_BE_REPLACED

In August 1913, Montevideo hosted a Brazilian football team for the first time when a combined São Paulo league side toured the Río de la Plata. While the first official Uruguay-Brazil international match took place in 1916, the Paulista visit was no less significant. Upon the arrival of the São Paulo delegation, a Montevideo daily was … END_OF_DOCUMENT_TOKEN_TO_BE_REPLACED

Luis Suárez is just one goal away from equalling Uruguay’s all-time World Cup scoring record. If he isn’t already, he’ll soon be considered the greatest striker – if not footballer - in the country’s history. But most remain unaware of the player whose record Suárez is about to break, Óscar Míguez, who holds the record … END_OF_DOCUMENT_TOKEN_TO_BE_REPLACED

Uruguay goes to Russia 2018 with an exciting young midfield..but this new look is in fact a return to a style of old.. 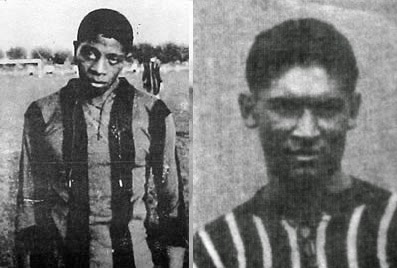 Uruguay went into the 1916 Campeonato Sudamericano in Buenos Aires seeking not only redemption, but reaffirmation. Of course, they there to avenge the humiliating 4-1 defeat suffered against Argentina at the Revolución de Mayo tournament six years earlier. More importantly, however, the tournament was an opportunity for Uruguay to measure both their progress as a nation … END_OF_DOCUMENT_TOKEN_TO_BE_REPLACED

In 1964, Mario Benedetti described football as anesthesia. It was a social drug, co-opted and exploited by governments who encouraged the people to forget their problems. If only for ninety minutes, football was an escape from social and economic uncertainties that would otherwise control one’s life. Five years later, Benedetti’s words still held true. May … END_OF_DOCUMENT_TOKEN_TO_BE_REPLACED

Uruguayans always looked to the British. Since those early days in the open spaces of Punta Carretas, the Uruguayan’s relationship with the game of the ‘crazy English’ evolved from curiosity, to admiration, to imitation. Given the opportunity, the Uruguayan took the game and made it their own. They say from there developed that famous, home-grown … END_OF_DOCUMENT_TOKEN_TO_BE_REPLACED

Carlos Scarone was born in barrio Peñarol, Montevideo, not long after his father arrived from Savona, Italy in 1887. The entire Scarone family, headed by Don Giuseppe, became immersed and enamoured in the local Central Uruguay Railway Cricket Club, known simply as Peñarol. It was in the streets of that barrio where Carlos adopted a love … END_OF_DOCUMENT_TOKEN_TO_BE_REPLACED

My Tweets
My Tweets
From Beauty to Duty
Blog at WordPress.com.